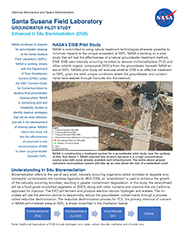 NASA is committed to using “green” treatment technologies at SSFL wherever possible to minimize impacts to the site’s unique ecosystem. NASA has developed a fact sheet summarizing NASA’s pilot study that is testing the effectiveness of one such treatment approach: enhanced in situ bioremediation (EISB).

Cleaning up Soil at the Santa Susana Field Laboratory 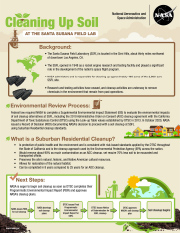 NASA prepared a fact sheet about the soil cleanup process, including information about a Suburban Residential Cleanup that NASA described in its October 2020 Record of Decision for Soil Cleanup at SSFL. 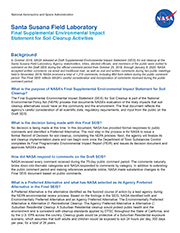 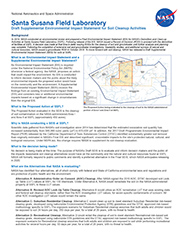 NASA has prepared a Draft Supplemental Environmental Impact Statement for Soil Cleanup Activities at Santa Susana Field Laboratory (SSFL) summarizing the purpose and need for a SEIS, the Alternatives evaluated, and a brief overview of the findings.

SSFL Past & Preset: An Overview of the NASA Investigation and Cleanup at SSFL, 2018 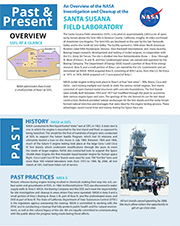 This fact sheet provides a brief overview of the historical operations carried out on NASA-administered land at SSFL. It describes demolition, groundwater and soil cleanup actions underway as part of NASA's commitment to clean up chemicals that remain from past operations at SSFL. 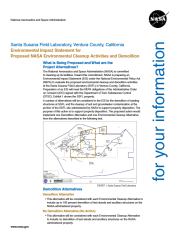 This fact sheet provides a description of the proposals and alternatives being considered for the Environmental Impact Statement being prepared for SSFL. 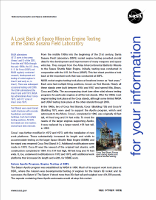 This fact sheet provides a look back at NASA's rocket engine testing at SSFL, primarily for the Apollo Program and the Space Shuttle Main Engine, beginning in the 1950s through the 1990s. 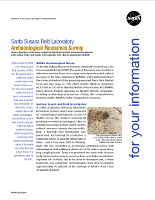 A site-wide Cultural Resources Inventory of federally-owned Areas I and II was completed in April 2008. The goals of this survey were twofold: to determine whether there were any previously unrecorded cultural resources on the lands administered by NASA, and to better understand the nature and extent of the previously recorded Burro Flats Painted Cave site. This effort assists NASA in complying with Section 110 of the National Historic Preservation Act (NHPA), which directs Federal agencies to identify historic properties, including archaeological resources. Having this comprehensive inventory enables NASA to better manage these resources. 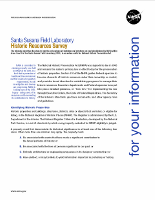 You also may read the entire Historic Resources Survey and Assessment. 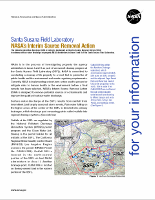 Currently, NASA is implementing a short-term action used to prevent or mitigate risks to human health or the environment before a final remedy has been selected. NASA’s Interim Source Removal Action (ISRA) is designed to remove potential sources of contaminants and improve the quality of surface water discharge.

An Overview of NASA's History at SSFL 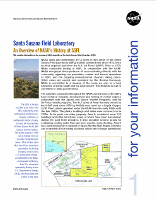 NASA administers 451.2 acres of federal property in two areas of the Santa Susana Field Laboratory (SSFL) and has operated here since 1973, when we first acquired land from the U.S. Air Force (USAF). Prior to 1973, NASA and the U.S. Department of Defense (DoD) conducted testing at SSFL in cooperation with the USAF. NASA recognizes the importance of communicating directly with the community regarding our properties, current and former operations at SSFL and the ongoing environmental cleanup taking place. NASA is committed to a cleanup of the areas we administer to a level protective of public health and the environment. This literature is part of our efforts to keep you informed.

The Use of Trichloroethylene at NASA’s SSFL Sites 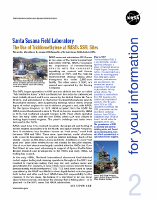 Trichloroethylene (TCE) is a non-flammable, colorless liquid that belongs to a group of chemicals known as Volatile Organic Compounds (VOCs). It is used mainly as a solvent for removing grease from metal parts, and in adhesives, paint removers and spot removers.