NASA has issued a Record of Decision for NASA Soil Cleanup Activities at the Santa Susana Field Laboratory. NASA’s decision is to proceed with a Suburban Residential Cleanup, as described in the Final Supplemental Environmental Impact Statement. A Suburban Residential Cleanup would be protective of public health and the environment, follow nationwide EPA guidelines, and is consistent with the cleanup standards imposed by the DTSC across the State of California.

NASA is eager to move ahead with soil cleanup. NASA can finalize a soil implementation cleanup plan once the California Department of Toxic Substances Control (DTSC) completes their Programmatic Environmental Impact Report and issues a decision document. 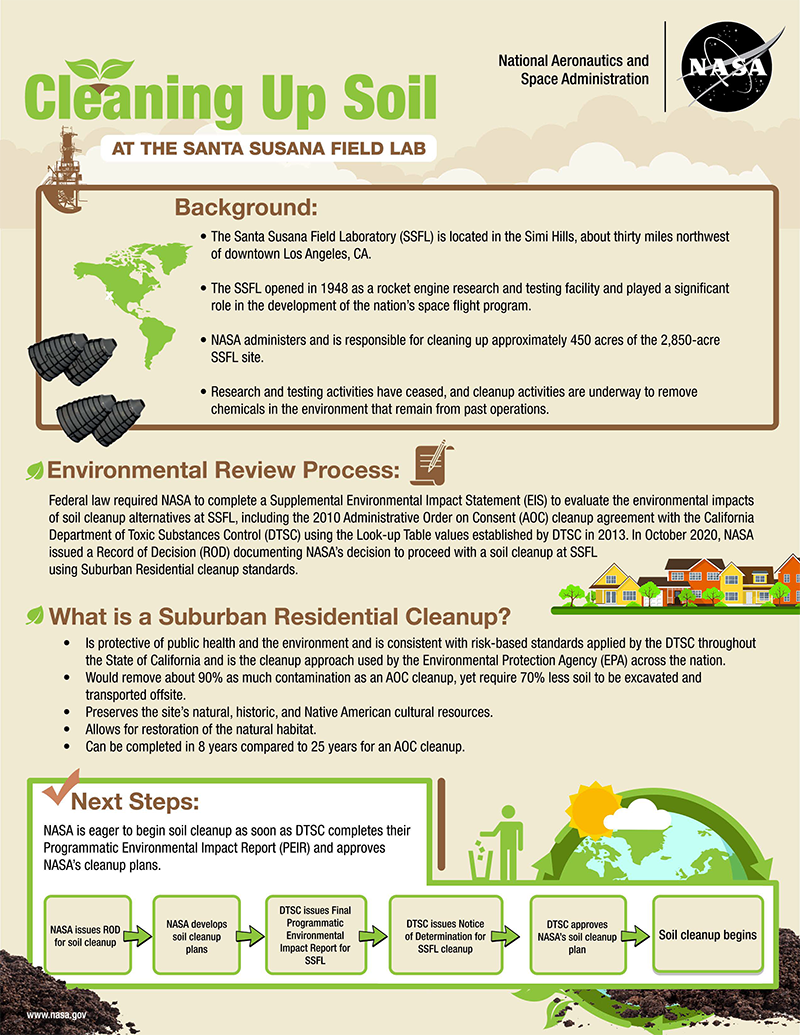 What is the difference between an AOC cleanup and the Suburban Residential Cleanup that NASA selected from the SEIS?

After NASA signed the 2010 AOC, DTSC developed soil Look-up Table (LUT) values at SSFL for 130 chemicals. The LUT values are based on either assessed naturally occurring threshold values derived from DTSC’s background study or the method reporting limit (MRL) for chemicals without a background threshold value. The MRL is the minimum level that an analytical instrument can report and provide a reliable result. These values are developed based on the capabilities of laboratory equipment; they are not based on known risks to human health and the environment.

Due the massive amount of soil requiring removal, and the lack of backfill that both meets AOC standards and is capable of restoring or sustaining the native plant life, an AOC cleanup would result in the devastation of plant life and geology in the region and alter water resources in unforeseeable ways.

DTSC has said that they will fully enforce the AOC. What happens if DTSC does not agree with NASA’s decision?

As a Federal Agency, NASA is required to follow the NEPA process and conduct an environmental review of impacts of a proposed action, in this case, soil cleanup, and NASA continues to adhere to NEPA requirements with this SEIS process. DTSC has their own State-mandated environmental review process. NASA is committed to conducting a cleanup at SSFL that is based in science, technically achievable, and is fully protective of the surrounding community and the natural environment. NASA looks forward to working with DTSC on our shared goal of beginning a safe and swift soil cleanup of the SSFL.

What about nuclear containments? Will a Suburban Residential Cleanup get rid of those?